It all started when a few like-minded musical people met in the choir vestry of Bude Central Methodist Church on 17th October, 1951 to consider forming the Bude Choral Society.

The membership fee was fixed at 2/6d (12.5p) per annum, members purchased their own music. It was decided that the first performance should be Edward German's Merrie England, which was performed in March 1952 in the Headland Pavilion (now closed but previously was JJ's Bar and The Break Night Club).

Merrie England, which produced a profit of £10.7s.1d. (£10.35) was followed by Mendelssohn's Elijah and the concert version of Smetana's Bartered Bride. The music was hired from Plymouth Public Library, so that no member of the choir would “suffer hardship on being requested to purchase his/her music”.

BCS has gone from strength to strength, particularly under the leadership of their present Musical Director, John Hobbs, who has been resident conductor since 1969, with a gap between 1982 - 1988. This gap was admirably filled by Ian Garden, who is a past Music Director at St. Petroc's School in Bude; David Perrett, former Head of Music at Budehaven School, and Veronica Jones, who taught music and conducted in Launceston.
During the past 20 years the Choir has joined forces with Torrington, Holsworthy, Launceston, Tintagel and Truro Cathedral choirs. 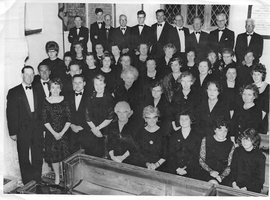